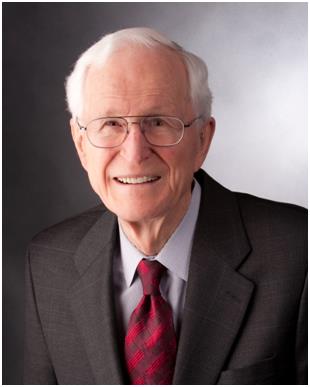 One of Council Bluffs iconic legal forces, Philip J. Willson, passed away early in the day on May 8. Phil was 90.

A prominent lawyer practicing in the metro area for more than 60 years, Phil's personal passions were his clients, art, and helping the community.

Born in Morning Sun and raised in Fairfield, Iowa, Phil received a degree from Parsons College. As a sophomore, Phil volunteered for the U.S. Army, where he became a member of the Office of Strategic Services, which was our nation's intelligence agency during WWII and a predecessor to the CIA. While overseas during the war, Phil advanced his education, expanded his love of music and the arts, and participated in the first-ever football game in Berlin, Germany. After the war, he attended Yale University and earned his law degree in 1949.

Phil came to Council Bluffs to begin his legal career. He focused mostly on defense work for insurance companies, although in the 1950's he was assigned two murder trials, one of which ended in an acquittal. In 1974, Phil and Allan D. Vestal co-authored "Iowa Practice" to help guide attorneys in the practice of law. In 1994, Phil and Frank Pechacek, Jr. formed Willson & Pechacek, P.L.C., located at 421 West Broadway in Council Bluffs. Through his leadership and experience, the firm has expanded to six additional offices in Carroll, Clarinda, Harlan, Oakland, Onawa, and Treynor.

Dozens of attorneys, judges, friends, and clients visited Phil at the Willson & Pechacek Open House held on September 30, 2013, to honor his 90th birthday. Phil highlighted the days of his career, telling stories "of when" and the "good ol' days" that captivated his audience. But the memories were followed by a brief and caring announcement that the gentleman of tireless energy believed it was time to step back and assume a less pronounced leadership role in the law firm. On January 1, 2014, Phil became "Of Counsel" with the firm. However, he continued to consult and share his wealth of knowledge with the firm's attorneys and staff. Phil's idea of slowing down was to come in to the office at every opportunity because his first love was practicing law. It is Phil's everyday leadership, loyalty, knowledge, and energy that will be missed by everyone in the community.